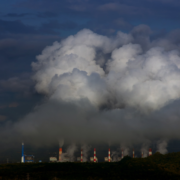 For over 30 years, doctors in Utah have been perplexed by the number of childhood cancer survivors being admitted to hospital with breathing difficulties in the winter. Last year, new research finally began to shed light on the link. The importance of air quality to recovery is widely recognized, but could it be that air quality continues to be vital even after recovery?

Douglas Fair, a pediatric doctor from the University of Utah’s Primary Children’s Hospital, explained that “childhood cancer survivors are more susceptible to bad air quality.” Research was led by the Huntsman Cancer Institute, and discovered a significant correlation between childhood cancer survivors and hospitalizations for breathing problems. The majority of episodes occurred within three days of a specific air pollution event, and children who had been treated with radiation and chemotherapy were typically more susceptible. Cancer survivors were seen to be approximately twice as likely as their peers to be affected by air quality to the extent that they developed a respiratory illness like bronchitis or pneumonia.

Lead researcher on the study, Judy Ou, explained that some children don’t have full immune function after these treatments, and their lungs are still developing. The researchers studied 3,819 cancer survivors with records from between 1986 and 2012. 185 of those patients had been hospitalized 335 times for respiratory conditions, with many instances occurring during periods of high air pollution.

One researcher at the Huntsman Cancer Institute highlighted the fact that the research is in its infancy. Anne Kirchhoff now plans to study the effect of ozone pollution on adult survivors, something which has yet to be investigated. She spoke of the need for public health advice regarding air pollution to be given on days that are currently classed as mild, so that those who are more susceptible have ample warning, and suggested that doctors warn cancer patients about air quality.

Because studies are still being conducted, it is unclear of the full impact of air quality on survivors of adult cancers. The best approach is to be vigilant regardless. This means ensuring that your air conditioner is properly maintained all year round: experts say that an efficient air conditioning system can improve air quality significantly. This is because they are designed with filters to remove airborne particles, keeping your indoor air clean even if you live in a high-pollution zone. It will also be helpful to keep an eye on pollution warnings, particularly in regions prone to high levels of pollution. If you are concerned about respiratory illness having completed your treatment, speak to your doctor for further advice.

The research into the correlation between air-related respiratory illness and childhood cancer survivors has given doctors a vital understanding of the link. Research into adults is now underway, so there’s hope for a deeper understanding in the future. For now, however, it is advisable to maintain your air quality as far as possible, and remain vigilant to respiratory illnesses.