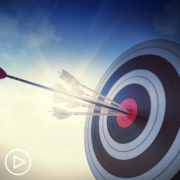 How Do AML Targeted Treatments Work? from Patient Empowerment Network on Vimeo.

What is targeted therapy in AML? Dr. Naval Daver describes the science behind targeted approaches and how genetic testing results can influence treatment choices.

Targeted therapy means that we’re targeting a particular mutation. Now we may be targeting in different ways. So, some of the drugs, like FLT3 inhibitors, these are the most established and oldest targeted therapies in acute myeloid leukemia, been in development for about 18 to 20 years, work by blocking a particular receptor, the FLT3 receptor.

That receptor, when blocked, removes the growth and proliferation signal to the leukemia blast. And that receptor is much more preferentially and heavily expressed on the surface of the acute myeloid leukemia cell as compared to the normal, healthy myeloid or lymphoid cell. So, basically, we are shutting down the growth signals, resulting in eventual death of the leukemia blast and that’s how FLT3 inhibitors work. So, it’s a more of a direct activity resulting in cell death over a few days and quick action. On the other hand, we have what also is called targeted therapies but act very differently. These are IDH1, IDH2 inhibitors.

So, when you use an IDH1 or two inhibitor, they do go to the IDH1 and two receptor on the surface of the acute myeloid leukemia cell, but actually, they don’t result in the death of the cell. They actually cause what we call differentiation.

So, they promote that immature abnormal leukemia cell to undergo maturation and become a normal myeloid cell, which, over time, will die because normal cells have a finite lifespan, and they will die. As compared to leukemia blasts, which can live on much, much, much longer. And so, this process is called differentiation. So, FLT3 inhibitor, very different direct cell death. IDH inhibitor, very different from most maturation differentiation of immature cells to mature cells and takes longer. So, this is important clinically because with FLT3 inhibitors. We see responses quickly, one to two months. IDH inhibitors it takes longer, three to five months.

And so, targeted therapy is not one and all the same. You may be targeting a particular receptor, but the modality of action downstream may be very different.

What’s the treatment regimen for targeted therapies, and how long are patients treated with these types of therapies?

So, it really depends on; 1) What setting we’re using it in? Newly diagnosed, relapsed AML. In relapsed AML, with most targeted therapies, whether you’re use is a single agent, like FLT3, IDH1, IDH2, TP53, MLL-targeted agents, the goal is to get a patient to transplant.

If we can get a patient to transplant, we do have a good chance of long-term survival. So, the goal is transplant. And we usually use a targeted therapy for short, finite period, two to four months, to get a remission, get to transplant, hope that will cure the disease.

We’re using Venetoclax, which is a kind of a targeted therapy.

Also, the BCL2 in combination with hypomethylating agents. And here, the targeted therapy is often used indefinitely. At least for one or two years. But in our approach and our guidelines, we continue the FLT3 inhibitor, IDH1 or 2 inhibitor or Venetoclax, as long as patient is tolerating it and does not have disease progression.

So, these are being used kind of similar to CML, chronic myeloid leukemia, where we use tyrosine kinase inhibitors or myelofibrosis, where you use jak inhibitors. They don’t cure the disease, but they continue to control the disease as long as you take them.

And in the end, we call this functional cure.

If somebody takes a FLT3 inhibitor and lives 20-plus years, semantically, he was never a cure, like an infection gets cured. But functionally, to me, he lived a normal life, and he was cured. And so, that’s how we’re using those inhibitors in the frontline setting different from the relapse setting.