The word “cancer” is terrifying, but it’s hopeful to know that early detection can lead to increased survival. Over 140 million Americans will get cancer in their lifetimes, but early detection can lead to better treatment and boosts one’s chance of a cure. That’s why it’s so important to be in tune with your body and regularly check for early symptoms that you might have the disease. In this way, checking your body for signs of cancer can form part of your self-care goals. You’re looking after yourself and increasing your longevity.

Cancer is not always easy to spot. Although it might present with a bump or lump, such as in the thyroid or breast, these are not the only symptoms to look out for. Sometimes, cancer in one part of the body won’t show up there. An example is pancreatic cancer. It will show symptoms when the cancer’s big enough to press on other organs, so an early symptom could be pain in the belly or back. However, there are some early, general signs that something’s wrong with your body and the cause could be cancer. Here’s a rundown of the most common symptoms associated with cancer. While it’s important to realize that these symptoms could be something else, it’s always worth checking with your doctor if they persist so that you can get the proper treatment.

If you’re not on a diet but you’re losing weight, this could be a sign of various illnesses, such as diabetes. However, it could also be a sign of cancer in the body. Unexplained weight loss is a common symptom of cancers of the stomach, esophagus, pancreas, and lung.

If you feel fatigued even when you’ve got a good night’s sleep, and this is a regular occurrence, cancer could be to blame. Fatigue is usually an early symptom of cancer such as leukemia, but it can also present with colon or stomach cancers that cause a loss of blood which goes unnoticed.

Skin cancer will obviously show up as changes to the skin, such as a sore that doesn’t heal or a mole that’s undergone changes in color. However, skin changes can also be a symptom of other cancers. Rippling or dimpling of the skin can signal breast cancer, for instance, while reddened skin can be a symptom of lung cancer, especially when it’s combined with difficulty breathing or a faster heart rate.

Diarrhea and constipation can arise from a variety of things, such as diet, but if they persist they can be a symptom of various cancers. An example is ovarian cancer, which might also present with bloating and gas. Colon and rectal cancer are also marked by changes in bowel movements, especially if they occur suddenly and persist.

Although there are many symptoms that can signal cancer in the body, the important thing is to note any changes that aren’t normal for you. Whether it’s changes to your skin, energy levels, or bowel habits, anything that doesn’t go back to normal after a few days is worth checking with your primary caregiver.

About the Author: Chrissy Rose is a Content Manager and is working to build one of the best senior resource sites.

Sometimes, even the most seemingly unrelated of symptoms can be a warning sign of cancer, says nytimes.com. While some might associate depression as a side effect of cancer, it can actually be a sign of cancer growth in the body. Some cancers actually trigger depressive symptoms. The phenomenon was first noted in 1931 with pancreatic cancer patients and more recent research supports the findings. The invasion of the cancer cells causes the body to release cytokines which are messenger chemicals that when released by certain cancers create an inflammatory immune response in the body along with the neurological response that causes depression. The theory is that when the cancer is removed from the body, the depression will gradually be reversed. This story emphasizes the importance of listening to your body and not ignoring symptoms that something more serious might be going on. Learn more here.

A new treatment for a common, but often not discussed side effect of breast cancer is showing positive results, says npr.org. Lymphedema, a condition that is common after cancer treatment, can cause painful swelling of the soft tissue of the arms and legs and can increase the risk of infection and can be life threatening. It is often the result of the removal of lymph nodes and radiation used to treat cancer. Some surgeons are experimenting with repairing or recreating a healthy lymph system for patients who develop lymphedema. The surgery, which has been around for about ten years, but has recently been perfected due to advances in body imaging, involves transferring lymph nodes from parts of the body that weren’t affected by the cancer treatment. Another type of surgery is designed to prevent lymphedema altogether. When the lymph nodes are removed, instead of cutting off the vessels they are reattached to a vein so that the drainage system has as little interruption as possible and the risk of lymphedema is reduced. You’ll find more about lymphedema, the surgeries to prevent it, and some patient stories here.

There’s new research from the National Cancer Institute, says dailymail.co.uk, that might make you stand up and take notice. It turns out that even just one hour of sitting increases your risk of getting nine types of cancer, including lung, and head or neck, in addition to breast and colon cancers. The information was reported at the American Association for the Advancement of Science conference in Austin, Texas earlier this month by Charles E. Matthews, an epidemiologist at the National Cancer Institute. Matthews says that eliminating health risks requires four to five times more exercise than previously thought. While exercising more is important, says Matthews, even more important is less sitting. Matthews recommends adding in light household chores or taking a walk instead of watching television. Get more information here and you can also watch a short video reporting the findings here.

Finally, February is Cancer Prevention Month. According to moffitt.org, research and studies continue to show that the majority of cancers are the result of lifestyle choices and environmental factors that could be changed or avoided to prevent between 70 to 90 percent of the gene mutations that cause cancer. Fortunately, some of the ways to prevent cancer are pretty easy and painless. You can find six strategies from Moffitt Cancer Centers here and seven tips from mayoclinic.org here. Of course, whether it comes to prevention, treatment, or support, you will find some of the best resources available right here with Patient Empowerment Network. Check out our programs here.

My year is off to a rocky start – Myeloma is wreaking havoc on my body and doing a number on my ever-weakening immune system. New Year’s Eve I went to the emergency room…. they ran tests and sent me home.  A few weeks ago, I went to the ER again as I have been puking nonstop, unable to hold down anything even those that go straight into my intestines via my GI tube. I was so dizzy I couldn’t handle it anymore. I figured they would do the normal treat and release but they didn’t. I spent 48 hours in the ER till they found me a room, my primary care physician came in and said, “I’m getting you out of here cause it’s most likely just an ear infection.”  Well that two days ended up being seven days and many doctors were called in, including a few of my previous specialists. He then called my oncologist who said yes, we will resume care just get her here. I then was at that hospital another seven days. They changed my formula after withholding some of my meds that entire time. Two weeks without Lasix and they wondered why my potassium bottomed out. Nothing makes sense about the time there but with my new feeds I’m doing well on.

So, I’ve been home a week now. My labs they drew Monday were normal. Potassium was 2.7 at the hospital and are 8.2 now. I had restarted my Lasix on Saturday before the labs were drawn. Of course, now I’m dealing with severe swelling. When I was weighed at the hospital I dropped from 204 to 130! No one is happy about the weight loss and I’m questioning if I need the Lasix, is it causing me to swell? So, I have an emergency cardiology appointment this week. I will also see my oncologist this week.

I’m also wondering if I have a blood clot as when I was in the hospital I started having numbness from the ankles to my feeding tube area!  So much going on ….and yes, I’m scared. My grandfather died from a clot going into his lung unnoticed by hospital personnel back in the 80s, I’ve told my care team about this and about the numbness and no one is taking me seriously. They called the doctor on record who did nothing either. Now my father found out he has clot issues in his legs (not his dad who had that clot but my moms, my father had to have surgical intervention to ease his). 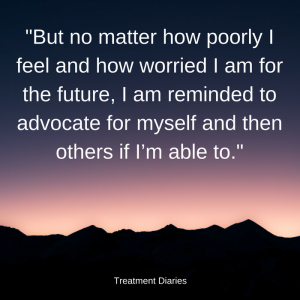 All of this on top of dealing with cancer – too much for one person to deal with.  But no matter how poorly I feel and how worried I am for the future, I am reminded to advocate for myself and then others if I’m able to. I sometimes have a hard time remembering that myself…It’s going to be a long week