Cancer is a stealthy assailant. Symptoms can be nonexistent or masquerade as some other ailment. When a medical professional utters the “C” word, the shock can be intense.

“I had no idea,” said Lindsay Hutchings of the softball-sized tumor that had been growing in her chest behind her breastbone. “I just knew I didn’t feel right.”

Lindsay was 34 at the time of her diagnosis. A mother of two young children, she never suspected cancer when she started feeling unwell. It was October. Time for picking Halloween costumes and the season when colds spread like wildfire through schools.  A mom with young kids feeling fatigued and achy was nothing to be alarmed about.

Lindsay went to a walk-in clinic. When she didn’t improve, she went to her primary care doctor. She was given antibiotics. She was tested for the flu and then mono. Allergies were blamed and antihistamines suggested. Every week she was back in either the walk-in clinic or her primary care doctor’s office.  Until one morning she woke up with a swollen neck and jaw.  She knew this was not just a stubborn cold. She knew it wasn’t allergies.

“This time I was diagnosed with a sinus infection and referred to an Ear, Nose & Throat (ENT) physician. It was frustrating because I knew it wasn’t a sinus infection. I just didn’t have any idea what it could be.”

By this point, Lindsay’s husband, Jake, was going to appointments with her in hopes he might think of some question or detail she had missed. The ENT doctor examined Lindsay and listened to the path that had brought her and her husband to see him. He scoped Lindsay’s sinuses and found nothing.

Then he ordered a CAT scan and posed the possibility that Lindsay’s symptoms might not be related to a virus, allergy, or superbug. It might be cancer.

She was told to expect to wait three weeks for the results of her CAT scan because of the Christmas and New Year’s holidays, but the ENT called her after a few days with the results.  He suspected lymphoma and referred her to an oncologist.

Lindsay started the New Year off by having two biopsies and a PET scan to confirm what the ENT had suspected.  Four months after she first began feeling off, Lindsay had an answer. It was Stage IIB Hodgkin Lymphoma.

Cancers that start in white blood cells—also called lymphocytes–are categorized as lymphomas. The two main types of lymphomas are Non-Hodgkin Lymphoma and Hodgkin Lymphoma. Hodgkin Lymphoma (HL) can start in any lymphoid tissue in the body, such as the spleen, bone marrow, thymus, adenoids or tonsils. However, it most often starts in lymph nodes in the upper part of the body. Lymph nodes are bean-sized collections of lymphocytes and other immune system cells and are located throughout the body.

The causes and triggers for HL are unknown. Children and adults can develop Hodgkin Lymphoma. The average age at the time of diagnosis is 39. Although there is a higher rate of lymphomas in people with immune disorders, there is usually no known risk factor or cause for people diagnosed with HL.

There are four subtypes of classic HL and a rarer form of HL called nodular lymphocyte-predominant Hodgkin lymphoma (NLPHL). Treatment for the disease varies depending on what type the patient has, what stage the disease is in (I, II, III, or IV), and whether certain other symptoms are present (called B symptoms).

From the first mention of lymphoma by the ENT physician Lindsay began researching the disease online. She went to her first post-diagnosis oncology appointment armed with questions. Her oncologist patiently answered her questions and laid out a treatment plan he felt confident was the right one. He explained the survival rates were high and the rates of recurrence of HL were low. He assured Lindsay and Jake her prognosis was good.

“I was in shock. I had no idea what I was doing but he was responsive and reassuring. I would call or email my oncologist between appointments with questions and he always responded. It really helped me be positive and more confident,” Lindsay explained.

She needed that positive confidence to help with the first challenge that followed on the heels or her diagnosis. She and Jake had to sit down with their daughters—who were just four and seven—to explain their mommy had cancer and what that meant for their family. 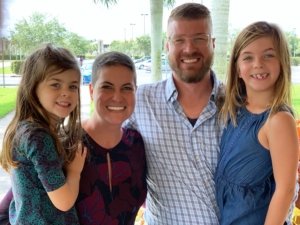 Lindsay’s mother had passed away from lung cancer just two years prior.  It was hard for seven-year-old Delaney to understand that this cancer was different from her grandmother’s.  She became anxious after the effects of treatment began taking their toll that Lindsay might die just as her grandmother had.

Her younger daughter had a hard time distinguishing the kind of sick her mommy was from the everyday illnesses she and her friends might have.

And of course, once treatment began, there was a lot Lindsay couldn’t do for her children anymore. Some days she couldn’t get out of bed. Often Lindsay was unable to take them to school or help with homework. She stopped volunteering at their schools. A low point for their family came early in Lindsey’s treatment when Delaney came home from school sick Lindsay had to avoid being near her. Meanwhile, her husband worked from home as much as he could or took time off to care for Lindsay and their daughters.

Lindsay admits, “I still feel guilt for the burden I put on my family.”

Lindsay’s cancer was treated with chemotherapy and radiation. There were side effects, of course:  exhaustion, chemobrain, nausea, constipation, blood clots.  She had to get daily shots of blood thinners in the doctor’s office, which brought other risks and complications. There were moments of panic when it seemed the tumor had stopped responding and additional biopsies followed.  But in the end, nearly a year after Lindsay first began experiencing symptoms, she was declared cancer-free.

There is a sense of victory from beating cancer. But like many other cancer survivors, Lindsay can’t say her cancer journey has truly concluded.

“At this point I am cancer-free, but I’m paranoid. It [the tumor] got so big without me knowing! I feel like some part of me will always worry.”

Ten to 30 percent of HL patients experience recurrence of the disease, with recurrence being lowest for those who are treated in the early stages of the disease. However, rates of developing a second cancer are higher for HL survivors than the general public regardless of whether the lymphoma returns.

Lindsay will have quarterly follow-up visits and two scans this year to screen for recurrence. As long as her results remain normal, she can scale back to annual screenings the following year. However, because she’s now at higher risks for other medical issues, she needs annual screenings by a cardiologist and pulmonologist. She will have annual mammograms now, instead of waiting until age 40 or 45. She has a roster of doctors at a time of life when many of her peers are in peak health.

The upside, Lindsay says, is that if any of her friends or family ever need a recommendation for a specialist in town, she has her list ready!

In addition to the health concerns she will carry, Lindsay also continues to deal with fatigue. Fortunately, while undergoing treatment Lindsay was able to connect with, Brittany, a two-time survivor of Hodgkin Lymphoma.  Brittany used to teach at Delaney’s school and when she heard about Lindsay’s diagnosis, she tracked down her phone number from a friend because she knew from experience how helpful it is to hear perspective and encouragement from someone who has been there before.

“When I went to my appointments, I was usually the youngest person in the office by decades,” Lindsay explained. Talking to someone closer to her own age has helped.

In addition to finding a connection with a fellow survivor, Lindsay is also grateful for the support she and her family received from friends and family in their community. During her treatment, Jake and Lindsay’s family helped as they could.  But there was also an outpouring of support from friends and acquaintances who helped with meals, gift cards, and donating to a GoFundMe account for the family.

“If I could give one piece of advice,” Lindsay says, “it would be to build your community. If we didn’t have friends and family to help get us through, I don’t know what we would’ve done. You can’t be involved in your community or volunteer or even go to church when you are sick. But I am so grateful that we were involved and active before the diagnosis.”

At a time when she saw few people and did very little outside of her home, she felt buoyed by the care and concern of from relationships she’d established before her illness. So, along with the guilt and worry she may carry forward from her cancer journey, she will also carry an abiding appreciation for the value of a supportive community.

Life for the Hutchings family is gradually settling back into normalcy, with family vacations and school schedules supplanting doctors’ appointments and treatments. Lindsay can begin to enjoy her new mantle of ‘cancer survivor’ with increasing confidence. But rather than consign the experience to something that “happened” to her, she is sharing what’s she learned from the experience. She would not claim to be an expert in cancer and its treatment options. But she does advocate for the power of building relationships and positive thinking. These are lessons that can help others whether they are confronting cancer or any other life-altering ordeal.