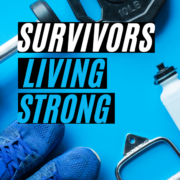 About a decade ago, as a member of her local YMCA, Jennifer Buckwalter happened to notice a group of people wearing matching t-shirts. She’d watch them use the equipment and go to group classes together. She was intrigued. Sometime later Buckwalter became a spin instructor at the Y and she learned the group she’d been observing was called Livestrong at the YMCA, a unique fitness program for cancer survivors. Now Buckwalter leads those groups of survivors-in-matching-t-shirts on a health and fitness journey.

“It’s about being healthier in spirit, mind, and body. That’s what we push all the way through,” says Buckwalter of the 12-week Livestrong at the YMCA program, which was developed in 2007 by the Livestrong Foundation when feedback from cancer survivors identified a need for help returning to physical activity after treatment. Two Rivers YMCA in Moline, Illinois, where Buckwalter is an instructor, was part of the Livestrong at the YMCA pilot program. The program is offered, at no cost, to cancer survivors who are 18 or older, and it comes with a t-shirt. While the program is open to participants with all types of cancer, Buckwalter says she is most likely to have survivors of breast cancer, lung cancer, prostate cancer, and melanoma in her groups. Survivors are eligible for the program if they were diagnosed that morning or 20 years ago, she says. Past participant Marvis Hafner was a five-year survivor of breast cancer when she did the program. She had a friend who told her about the program and encouraged her to sign up, and now she says, “It was probably the best thing that ever happened to me and my husband.” Her husband also participated in the program as Hafner’s support person. The program is limited to 12 survivors per class, plus each survivor can bring a support person, also at no cost. The program, largely funded through donations, is offered in 791 YMCAs across the country.

Of course, programs will differ from location to location, but they all follow the basic formula developed by the Livestrong Foundation. Participants are required to provide medical releases, a complete health history, and list of medications. In addition, on the first day of the program, each participant undergoes an extensive assessment for mental health, ability to perform daily activities, and tests in flexibility, walking, strength, and balance. “The assessment helps to structure class around our participants,” says Buckwalter, a National Exercise Trainers Association certified personal trainer and YMCA exercise specialist for chronic disease programing who underwent additional training to be a Livestrong instructor. In the training she learned how to do patient intake screenings and medical histories, and she learned about cancer. She had the opportunity to interview survivors and shadow another Livestrong instructor. She found that her certifications, her Livestrong training, her background in social work, which she studied in college, along with her experience of working for Palmer College of Chiropractic, where she says she learned a lot about optimum health, all came together to help her better serve the course participants. “If you’re going to do the program, we require a commitment and that commitment is to yourself,” says Buckwalter who believes in and has high expectations for the participants in her classes. “I’m not going to baby them,” she says. That’s my way of empowering them.”

At Two Rivers YMCA, most of the participants are 50 or older. The classes meet two days a week for an hour and a half. There are three classes offered each session, two in the daytime and one in the evening to accommodate those who work during the day. There are two sessions a year, fall and spring. “The first week is awkward”, admits Buckwalter. She says she tries to keep the mood lighthearted, and she and her co-instructor facilitate group conversation so participants have a chance to get to know each other, but, she says, by week four or five, the group takes on a life of its own, and the participants really take hold of the group. “It’s not designed to be a support group,” she says, but notes that it often becomes one. “It gave me a sense of belonging,” says Hafner. “I had retired, and I missed the camaraderie.” With the program she says there is always someone there to support you. Often, the connections that are made in the group continue after the program concludes. Buckwalter helps to facilitate the connection thanks to an idea from one of the members of the first group she led who started a phone tree among the participants of her group. Now Buckwalter offers that idea to each of her classes.

The program is tailored to each group and each individual participant based on the assessments and fitness levels, but the overall idea is to get everyone moving and comfortable working toward whatever health and fitness goals they have. Participants learn how to best use a gym to fit their needs. They are taught to set up a workout and use fitness equipment and machines. They also get to try group classes, such as gentle yoga or low-impact Zumba. Health education is a big component of the program. “We talk about the importance of hydration, the importance of moving the body, and paying attention to what they are putting in their bodies,” says Buckwalter. The program also brings in professionals from the community to cover a variety of topics from nutrition to proper footwear. Hafner says she enjoyed the speakers, and she and her husband both benefitted from the extra push to exercise. “I was exercising at home, but not enough,” says Hafner, a retired nurse.

Some participants, like Kari Wood, are already physically fit when they start the program, but they are still able to make personal gains. “I felt like Livestrong supported my health journey of wanting to become the best version of myself…” says Wood, who found that the program addressed her mental health in positive ways. “My biggest benefit from the entire Livestrong program was the emotional side of it for me,” says Wood, a thyroid cancer survivor who, now in her early 40s, was one of the younger members of her group. She says that when she was diagnosed and being treated for cancer, and all the complications that came with it, she suppressed a lot of her feelings, but it was with the Livestrong program that she was able to work through all those bottled up feelings. “In my heart I knew the Livestrong program would allow me to be able to openly recognize, express and validate the private feelings of pain I endured during my time with cancer. No more hiding those thoughts and feelings like I did for so long. For me it was personally more of an emotional part of my journey instead of a physical one.”

Wood’s mother participated in the program with her, and she says it helped them grow closer. “It was an opportunity for me to truly open up and express how I felt, even though some of my words weren’t easy for her to hear. It opened up a whole new world for us and made us grow closer…I am incredibly grateful for that because I didn’t realize how much I needed to share and was holding inside until Livestrong came along.” Wood adds that being able to hear the stories of the other participants helped her mother gain insight into what she had gone through as a cancer patient.

Whatever aspect of health a participant needs to address, Buckwalter aims to show each person how to make their goals attainable. “We try to show them that a healthy lifestyle can be variable and can be personalized,” says Buckwalter. “The goal is to show them they can do it on their own.”

Buckwalter says she has found the Livestrong program to be very successful and there is data to prove it. Researchers from Dana Farber Cancer Institute and Yale University found that the Livestrong at the YMCA program yields significant increases in physical activity, overall quality of life, and fitness performance. They also found that the program participants had a significant decrease in cancer-related fatigue. In addition, the National Cancer Institute says, exercise is generally safe for cancer survivors and every survivor should maintain some level of physical activity. There is even research that shows that exercise can lower the risk of death for people who have breast cancer, colorectal cancer and prostate cancer.

However, Buckwalter doesn’t have to rely on the research to know the program works. She sees it firsthand. Progress is measured during the last week of the program. Each participant does a post program assessment that uses the same criteria from the assessment at the beginning of the program. “For the most part we always have positive outcomes and huge leaps, huge leaps for these people,” she says. The program ends with a celebration that includes healthy snacks, and a past-participant comes in to share their experience with the class. Buckwalter, who takes pictures throughout the program, presents each participant with an album of photos.

When they have completed the program, participants are offered a nine-month, reduced-rate membership at the YMCA. Buckwalter says that four or five survivors from each group take advantage of the membership. Hafner and her husband both continue as Y members. She calls the Livestrong program a steppingstone into fitness and is thankful for the program because when it comes to exercise, she says it would have been too easy not to do it. Wood, who has been a member of the YMCA since she was three, also continued working out at the Y. “I loved that we tried so many other classes and physical activities. It made me want to attend new YMCA classes after the program was over. I became much more involved at the YMCA after Livestrong was over with. In turn, my three kids are much more active than they used to be because exercising and taking care of ourselves as best as we can is now a part of our family’s healthy lifestyle.”