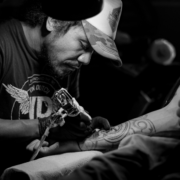 Three in ten Americans have a tattoo, with younger generations being more likely than ever to get one. Many cancer survivors get tattoos to illustrate their journey, and cosmetic tattoos and decorative nipple tattoos following breast reconstructions can help people to accept their post-cancer bodies. But what if these symbols of hope are actually linked to an increased risk of causing cancer?

Ink in the lymph nodes

Very little research has been done into tattoo inks, but physicians have noted that tattooed people have lymph nodes that are colored. The lymph nodes act as a filter for the body and are important for healthy immune system function. Circumstantial evidence also suggests that pigments from tattoo inks, both organic and inorganic, travel around the body and have the potential to do damage. Studies on mice have found that deposits in lymph nodes are not a health concern, though this may not be the same for humans. Simply living longer lives than mice can lead to health concerns if ink deposits accumulate in the body and cause a problem in the long-run. However, it’s important to note that there’s currently no hard evidence to prove that tattoo inks are directly linked to an increased risk of cancer.

The tattoo industry has gone largely unmonitored, but now that it’s growing and tattoos are becoming more popular, there’s a need for regulation, particularly of the inks. Research shows that inks contain a wide range of chemicals and heavy metals, some of which can be toxic. Some elements included are titanium, aluminum, nickel and chromium, along with other metals. Some of these metals, along with preservatives, carriers and contaminants in tattoo inks, are known to be toxic and can potentially cause cancer. Additionally, research from the Australian government has found that 22% of all the inks they tested contained chemicals compounds that are known to cause cancer. Therefore, choosing the right ink can make a big difference, and henna tattoos can also be a good option for some people.

While some links have been found between cancer and tattoo inks, the evidence is largely circumstantial. As a cancer patient, getting a tattoo can be empowering and a symbol of ending or starting a new chapter in your life. Breast and nipple tattoos after mastectomies are growing in popularity too, and help women who have had breast reconstructive surgery to feel empowered and have a more natural-looking breast, which can help them to accept their journey and move on with their lives.

Knowing the potential risks is always a good idea but, based on current research, the risk is low. Getting tattoos done by professionals who have a good reputation and come recommended by others is always a good idea. Asking the artist about the inks they’re using can help you to do your own research into specific brands and make an informed decision.

Tattoos are here to stay, and while there’s currently no hard evidence to suggest that they increase the risk of cancer, there’s little reason to worry. Symbolic, decorative and cosmetic tattoos can help people to mentally heal after cancer, so there’s no reason why people should stop using them.