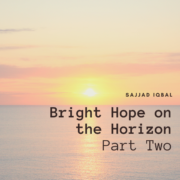 I would like to think—hope in fact—that no future cancer patients will have to fight the way I did to get certain treatments, that doctors today could help them prevent that. Oncologists now universally accept this novel concept that each patient’s cancer is different and must be treated differently. Treatment needs to be based, not on it’s  location, but on the unique pattern of gene mutations it exhibits. This understanding has led to the development and increasing usage of a test called Genome Typing. In the simplest explanation, genes are microscopic particles (nucleotides) located on the chromosomes of a cell. The genes instruct the cell to behave in a certain way and perform certain functions. Cancer alters, mutates, a gene to send a different signal to the cell so it  performs, not its normal function, but a function suitable for the cancer’s growth. This pattern of Genetic Mutations is unique to each cancer. Discovering and, possibly, attacking these mutations is called Targeted Therapy. Let’s assume that one patient’s parotid cancer shows the same gene mutations as the other patient’s breast cancer. Therefore, both these cancers need to be treated with the same medicine. The location of the cancer is totally irrelevant.

The problem is that federal agencies and the health insurers are still stuck in the past. My cancer, the salivary duct carcinoma of the parotid is practically a twin of the ductal carcinoma of the breast. It stands to reason that a drug that worked against one is likely to work against the other too. Because breast cancer is very common and parotid cancer is exceedingly rare, it is far, far easier for researchers and drug companies to test a new drug against breast cancer than against parotid cancer. Therefore, they can present convincing data to the FDA to show that a particular new drug works against breast cancer and thus get the approval for its use in breast cancer treatment. Unfortunately, parotid cancer patients, due to their small numbers, are left out in the cold. There are plenty of drugs that are FDA approved for use for breast cancer but none for parotid cancer. This allows the health insurers to refuse payment for most new drugs for patients like me. It becomes an uphill battle, often futile, to fight. I am blessed to have had the wherewithal I did, but not everyone survives the fight.

The simple logic is that if a drug blocks Her2 and successfully treats Her2-positive breast cancer, its use should be approved for any cancer anywhere that is Her2 positive. Unfortunately, this simple logic is lost on many in the hierarchy.  Lately, there have been some encouraging signs that the FDA is moving in this direction. Insurers are still slow to respond but ultimately they will.  Tomorrow is looking better and brighter.

I think of the whole thing in this way: The evolution of cancer treatment is similar to the evolution of how we used telephones. Years ago, in the 1940s and 1950s, we had neighbors sharing the same line, first the crank-up type and then old rotary phones—party lines they were called. It would not be unusual to pick up the phone and learn that your next-door neighbor was already talking on it. You would have to wait—and hope that your neighbor would not blather on for another hour before you could make your call.

Later, we began to see home phones—one house, one line. But still, everyone in the house was on the same line. If you picked it up to make a call, you might hear your brother talking to his girlfriend. You couldn’t get on until he hung up.

Today we have cell phones and the days of the house phone are almost over; the concept of a party line is simply laughable.

Cells phones of today are highly personalized and sophisticated communication tools. They are configured exactly to specific users’ specifications: their own phone number; the exact amount of memory they need; the number and kinds of apps they want installed; their contact list; their choice of songs, photos, videos, and documents; and even their very personal and confidential data. It is a highly personalized gadget now.

So is cancer treatment.

And that wonderful news is why if there were a better time to have cancer, to have a doctor drop the bad news on you, it is today—right now.

Why is this happening?

On one front, medical science continues to make extraordinary strides. Each new kernel of knowledge accelerates and expands what was previously known—one new discovery leads to five more. Targeted therapy is one example—but a very good one.

On a second front, doctors have begun to expand their knowledge about how to marshal the body’s own defenses, its own immune system, to attack cancer.

Former President Jimmy Carter astounded the world in December 2015 when he announced he was cancer free. Only months before, he had said it was unlikely he would survive the late-stage malignant melanoma that had spread to his brain.

He might have astonished the general public, but medical insiders were not as surprised. Mr. Carter was the beneficiary of a new wonder drug, Nivolumab, and the relatively new concept of immunotherapy for cancer—checkpoint blockade. 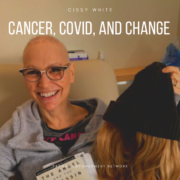 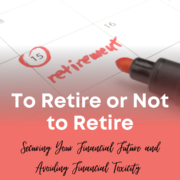 To Retire or Not to Retire: Securing Your Financial Future and Avoiding Financial Toxicity 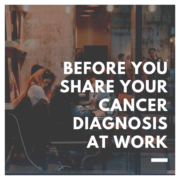